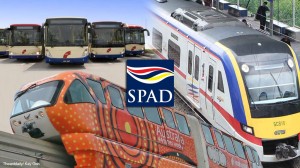 We, the Malaysian Youth & Students’ Democratic Movement (DEMA) are gravely concerned with the SPAD’s decision to increase the taxi and express bus fares by between 20& – 67%. We urge that the government to regain state control of the public transportation system, reduce public transport fares and to prevent the public transport services from becoming a rent-seeking tool for cronies to exploit the people.

The major problem plaguing our public transportation system is that of cronyism. Instead of being used to promote the right to freedom of movement for the people, especially those who cannot afford to have their own transport, the government by handing over the operation of the public transportation system to cronies has transformed what is supposed to be a public goods into a money-making business.

The government by colluding with the cronies has promoted a series of fare hikes without regulating the quality of the public transportation system. The youth has become the greatest victims of this failed governance. This is so especially when there exists uneven distribution of the national wealth in geographical terms, youths who are incapable of owning their own vehicle are forced to travel long distance by public transport for education and better working opportunities.

On the basis of the above reasons, we wish to express our dissatisfaction towards the fares hike sanctioned by the government and declare the following demands:-

2) The government shall take positive steps in lowering the fares and offer free public transport during peak hours to encourage the more people to use public transport services. Low-income earners and youths should be given the relevant subsidies to ease their already high cost of living and to uphold their right to freedom of movement;

3) Students studying in higher education institutions away from home should be given transportation subsidies to alleviate their financial burden;

4) Active steps must be taken to regulate the quality of public transport services to encourage more users, reduce the number of private vehicles on the road as part of the sustainable development of this nation. The government should also tighten the control against operators of express bus service who may compromise the safety of the passengers (e.g. by requiring drivers to work overtime) in favour of profit maximisation.

We urge the government to accept the demands of the youths, failing which we will not remain silence but to fight against a pro-business government. The government and their cronies are reminded not to dig their own graves in the capitalist system as “the proletarians have nothing to lose but their chains; they have a world to win”.